Widowmaker referred either to a fabricated male persona created by Lady, or, the three different sets of costume body armor associated with it. The Widowmaker persona and armor were intended for Lady's husband Croaker, who was both the Captain of the Black Company and the Liberator (hired warlord) of Taglios. Except for a brief usage by Murgen, the first Widowmaker rig was used exclusively by Croaker throughout the Company's movements in the Books of the South and the Books of Glittering Stone. A copy of this armor used by Ram during Dreams of Steel.

Croaker would take on the Widowmaker persona simultaneously when Lady became Lifetaker, her own counterpart persona and corresponding armor. Mounted on the massive black stallions and crawling with frightening lights and glamours, the two larger-than-life personas terrorized the Shadowlanders and confused their leaders during the Shadowmaster wars. About 15 years later in Soldiers Live, both Widowmaker (a brand new set of armor) and Lifetaker reappeared in the homeworld, this time during Sleepy's war against the Protectorate.

The first Widowmaker rig was a black armor set with a winged helm and a flaming sword. It was commissioned by Lady for Croaker – alongside her own Lifetaker rig – to emulate the style of the Ten Who Were Taken and to inspire terror in the enemy ranks. Upon wearing it for the first time in Shadow Games, Croaker was dubious, and described it as follows:

The Company's two minor wizards One-Eye and Goblin – both thoroughly experienced with deceptive magic and glamours – disagreed about the suit's appearance. One-Eye stated "it would look intimidating as hell from a distance" whereas "Goblin figured my enemies would laugh themselves to death". However, both men were permanently at loggerheads and would virtually always disagree on any particular topic.

Often, large mysterious crows would land on Croaker's shoulders when he wore the rig, and he let them remain for additional dramatic effect. These would turn out to be the minions of Soulcatcher, keeping tabs on him for her own purposes.

It was first used at the Battle of Ghoja Ford in Shadow Games. Lady surprised Croaker with the costume immediately before the battle, and even gave him the choice of naming his either Widowmaker or Lifetaker. When the four Shadowmasters convened at Shadowlight to discuss their defeat at Ghoja, Moonshadow informed the others of the mysterious Widowmaker and Lifetaker for the first time.

Croaker again wore the armor rig during the Battle of Dejagore outside the walls of Dejagore. During this event, he was unhorsed from his black stallion by a carefully-placed arrow which penetrated both his breastplate and his chest. The arrow had been loosed by Soulcatcher (or possibly her minion, the imp Frogface). As the battle turned against the Black Company, Murgen the standard-bearer believed Croaker was dead, and removed the Widowmaker rig from his body (except for the breastplate which was affixed to him by the arrow). Murgen, donning the guise of Widowmaker, attempted to rally the fleeing Taglian soldiers. But he failed, and fled behind the walls of Dejagore with it despite losing the Black Company standard.

Murgen hid the Widowmaker rig (minus the breastplate) somewhere near his sleeping quarters during the Siege of Dejagore. But Soulcatcher's imp Frogface found it and stole it, unseen. At Soulcatcher's bidding, Croaker wore it again. Alongside Soulcatcher (who was now wearing a Lifetaker rig of her own creation) Croaker was now shielded by the sorceress's immense protective spells. The two rode out from the hills as Lifetaker and Widowmaker and together they fought the besieging Shadowmaster army. They interrupted the siege during a critical moment when Shadowspinner was on the verge of taking the city walls from the Company. Soulcatcher engaged in a fierce sorcery duel with Shadowspinner, while Croaker simultaneously rode about and cut down many Shadowlanders. The two succeeded in breaking Shadowspinner's ability to take Dejagore, though the siege did continue.

Lady created a duplicate Widowmaker armor for Ram, one of her close companions among the Stranglers (her new allies in Dreams of Steel). Just like Croaker's rig, it displayed witchfires to frighten the enemy, but did not have Soulcatcher's crows on his shoulders. Ram, a very imposing man, wore it during some of Lady's operations against the Shadowlanders.

Croaker wore his Widowmaker armor rig with increasing frequency throughout the rest of the Shadowmaster wars, as noted by Murgen, the Annalist of She Is the Darkness. Murgen found Widowmaker to be an impressive sight. Croaker donned the Widowmaker persona for all major events, including: the Battle of Lake Tanji; the Battle of Charandaprash; the Siege of Overlook; and, the Company's first crossing back through the homeworld shadowgate to access the glittering plain.

The Daughter of Night and Narayan Singh – fugitive Stranglers on the run from the Company – were frightened by Widowmaker and Lifetaker and did not know that they were actually the Daughter's biological parents.

Disappearance during the Kiaulune wars Edit

This first Widowmaker armor was lost to Soulcatcher's Protectorate forces sometime during the Kiaulune wars (which occurred during the first 5 years of the 15-year gap between She Is the Darkness and Water Sleeps). Croaker surmised that "Soulcatcher probably had it in her trophy chamber".

With the original costume armor lost, a replacement Widowmaker armor was created. It was constructed during the 4-year gap between Water Sleeps and Soldiers Live by skilled native armorers in the world called Hsien. A huge black sword of a design similar to Uncle Doj's Ash Wand came with it. Croaker described the second Widowmaker armor suit as follows:

Croaker wore the new Widowmaker rig during the following events: 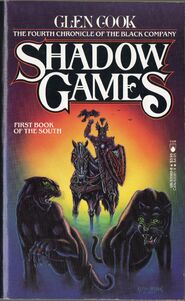 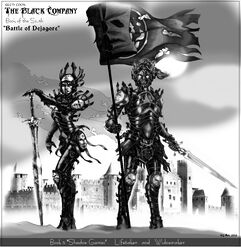 Lifetaker and Widowmaker by Виталий Стрелец 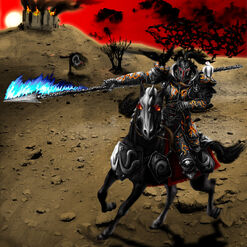 Widowmaker by Anon
Add a photo to this gallery
Retrieved from "https://blackcompany.fandom.com/wiki/Widowmaker?oldid=13071"
Community content is available under CC-BY-SA unless otherwise noted.