She Is the Darkness

Water Sleeps by Glen Cook is the ninth and penultimate book of the Black Company series and the third novel in the Books of Glittering Stone tetralogy. It begins 15 years after the closing of the prior novel, She Is the Darkness.

From the back cover Edit

After the events of She Is the Darkness, the main members of the Black Company were trapped by Soulcatcher on the glittering plain and believed dead. Only a handful of people knew that "the Captured" were still alive and enchanted in a protective stasis. The Company was reduced to a mostly forgotten, underground organization... united in purpose but largely powerless.

The few reminiscent of the Company lived together with some associated (people that had not pledged any vows to the Company but were willing to help) in a Nyueng Bao District inside Taglios.

To remain hidden the Company made have use of subtle magic from the Company wizards One-Eye and Goblin. They also disguised themselves into society by working hard by day in common jobs. Each member had at least one new identity.

Taglios was ostensibly ruled by the Radisha Drah, while the power behind the throne was Soulcatcher, "the Protector". Willow Swan had become the head of the Greys, the city force in charge of maintaining order.

The main job of the members of the Company was to distract Soulcatcher while finding ways to be able to rescue the Captured on the glittering plain. To do so, Sleepy and Ky Sahra elaborated the plans to make the Company presence alive inside Taglios. That included using Murgen's son, Tobo, to distribute magic trinkets that would cause disarray and distress among the Taglian people.

While Sleepy focused on the military aspect of their small group, Sahra (Murgen's wife) took over the administrative tasks and made contact with her husband to gather information (Murgen, despite being one of the Captured, was still able to dream-travel around the world and report back).

As the old wizards of the Company become weaker and more afflicted by age the actions they executed become bolder. They directly attacked the Palace and captured Willow Swan (although everyone thought he had died). Disguised as daily workers Sleepy, Sahra and Tobo entered the Palace and successfully captured tow members of the Privy Council. Later Goblin replaced Tobo and they achieved to Kidnap the Radisha Drah which only aggravate Soulcatcher's irritation.

At the same time that the Company was acting the Deceivers appeared in Taglios, both the Daughter of Night and Narayan Singh were tracked by the Company wizards and captured by one of Sleepy's plans.

While the Company succeeds to sequestrate the Radisha, Goblin was trapped inside the palace and had to outsmart Soulcatcher to be able to run. In the process, he was able to creep her.

Soulcatcher planned a trap at the library, a place where Sleepy worked as Dorabee (a fictional persona). Soulcatcher wasn't aware of Sleepy presence in there, she only wanted to catch the responsible for swipe old documents of the library, documents that should have been destroyed long ago. Sleepy escapes the trap due to the unusual movement (or lack of it) on the street. Surendranath Santaraksita, the main responsible for the library,  and a copyist Baladitya also escaped death. They were captured by sleepy the night before the trap.

Mogaba and his troops arrived in the city and started to try to find the members of the Company, but they were already running towards the ShadowGate.

On their way to the Shadowgate the Company divided into two main groups.

Sleepy was with Uncle Doj, Singh the deceiver, and some others. She had bargained with Singh: He would receive their edition of the book of the Dead and he would guide them to the key he had stolen from Soulcatcher that previously had stolen it from the Nyueng Bao.

They followed Singh indications to the deceivers ritual place. Sleepy being naturally suspicious sent a small team to get to the place before her. Her friends had found a group of deceivers and got rid of them, she found out about it by stumbling on their clothes and weapons in the dark night. Singh tried to lure the group to wait until his friends arrived without knowing they would never come. After a while, he surrendered the key, a small but heavy hammer. In exchange, he received the book and his freedom.

With the key in hands, the group followed their plan and proceed to Kiaulune where the Shadowgate was located.

In Kiaulune the old wizards attached many magic tricks and traps to a cage to keep the Daughter of Night restrained. The harder she attempted to escape from the cage, the more pain and corruption would be brought to her body. The cage shared the same destiny as her, which means that she could not attack it directly. Only magic from outside could be able to free her.

Goblin and One-Eye also were able to reveal the true nature of the Shadowgate key. After they removed the external metal that made it look like a hammer they discovered that it was actually a golden pickax. A tool used by Deceivers to handle victims' corpses.

The Company relieved the regional army leader – Suvrin – from his command, and captured a fort from Khusavir Pete. But a small shadow escaped to warn Soulcatcher. Soon Murgen confirmed that Soulcatcher was coming: she left Taglios aboard a flying carpet and would be there quickly.

The group of refugees that now formed the Company abandoned their camping and prepared an ambush for Soulcatcher. Uncle Doj sneaked and destroyed Catcher's carpet. After that, he ran through the Shadowgate where his companions were waiting. Catcher saw him entering the gate but had not the time to pursue him: Khusavir Pete, who was restrained nearby, opened fire with a fireball projector and nearly killed her.

After all the Company members crossed the gate, Lady's sister got there and saw by herself that her enemies had the golden pickax from the Deceivers. She was once more attacked by a former member of the Company but due to her high state of stress was able to react fast enough to elude death. The poor man not so much...

Sleepy's group started their journey through glittering plain, it elapsed almost undisturbed. Along the path, they found the desiccated bodies of Sindawe, Bucket, and his bodyguard Suyen Dinh Duc, and several others. They also were delayed by snow which concealed the trail that they should follow. It was necessary for Goblin and Tobo (now a wizard apprentice) to unveil the way.

After arriving at the fortress with no name, the group was amazed to see Shivetya, the gigantic golem that protected Kina's tomb. He was stuck to a wooden throne by daggers. The throne was overturned over a crack in the ground and Sleepy ordered the group to stand it upright again. While people were occupied by her tasks she started to follow Swan down, into the guts of the plain. They followed a staircase down for a long time until they found an opening, a crude cave. Into the cave were several men, forgotten by time itself. They were petrified, frozen and unable to die in stasis, unable to live too.

Among the men were the old crew of the Black Company: Murgen, Lady, Croaker, the prince Prahbrindrah Drah, Murgen's brother in law - Thai Dei, Otto, Hagop, Blade, Cordy Mather and some more. The black wizards Howler and Longshadow were there too.

One-eye and Tobo started to wake a selected few of the Captured: Croaker, Lady, and Murgen. Blade and the Prahbrindrah Drah would be awakened by political reasons. Cordy Mather was dead, he didn't go into stasis. Worse, he tried to communicate with some other members and they also died after being touched. But what killed Cordy was not hungry or thirst, he fell into a trap in a deeper part of the cavern.

While the group was transporting the rescued members of the Company upstairs, Sleepy decided to go forward in the cavern. There Goblin disabled magical traps and they found the Books of the Dead. Sleepy discovered that Tobo had kept going downstairs and went searching for him together with Goblin.

They went down until the ground became flat. They have found Kina's tomb and Tobo was there enchanted by the dark goddess, the Lance of passion in hand near her. Goblin disabled the boy and they started to run upstairs. Kina in its distress started to send some magic smoke toward the three who were fleeing. Goblin rejected the dark goddess magic by using the standard. but he got surrounded and in its despair decided to sacrifice himself for the benefit of the others. He ran with the spear in hands and hit Kina under her breasts. The demoniac smoke set Goblin aflame, the ground shook, the survivors ran upstairs.

Tobo got to the top first and asked for help, Sleepy found Swan and they both went destroy the Books of the Dead. After that, they reunited with Uncle Doj on the room of the fortress where Shivetya was awaiting, seated in his immortal throne.

Shivetya communicates with Sleepy, showed to her what had happened in the past when Soulcatcher first visited the fortress. What happened when the old crew of the Company became the Captured. Then he sent them away. They flew until they reached the other members of their group that had already departed. After a small explanation, they followed the path that leads to another Shadowgate.

The group, now reunited, crossed the gate and what they saw was a land equal their own. It looked like Kiaulune except it didn't have signs of construction like Overlook.

As the group followed the path exiting the Shadowgate, they met some natives: the monks of Khang Phi. The monks communicate with Uncle Doj in a language that greatly resembled Nyueng Bao. The Company learns that the monks were there to look for sorcerers that have come from the gate before, specifically, Longshadow and his kin, who were once tyrants in this land.

The Company was allowed to make a camp in those fields, and they rescued the other Captured that were left behind. Tobo started to practice and study with Lady, the librarian, and even Longshadow. One-Eye survived four more years, in the meantime, he suffered strokes and got every day more disabled.

This is how the Company reached the Land of Unknown Shadows instead of Khatovar.

Water Sleeps was published as a standalone novel in the following editions, translations, and formats. They are listed in order of publication, earliest first; some reappearances of the same translation may be grouped together. See also Books of Glittering Stone for the list of omnibuses in which Water Sleeps appeared. 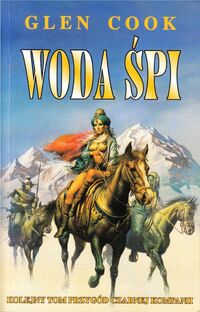 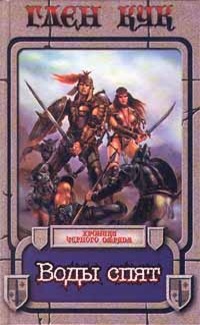 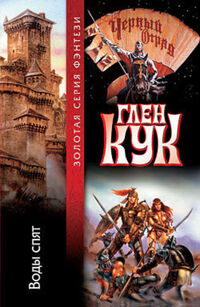 The French translation, first published by L'Atalante, was divided into two books and features original artwork by Didier Graffet throughout. 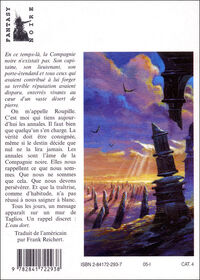 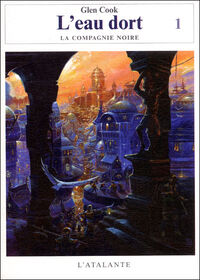 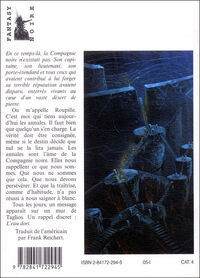 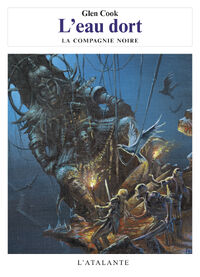 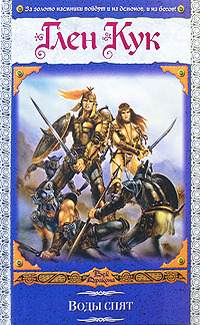 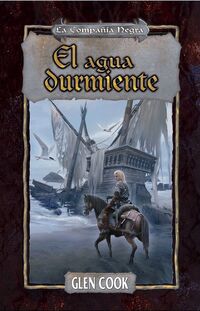 The same French translation previously published by L'Atalante (scroll farther up) was republished in 2010 by J'ai lu in smaller paperback format [poche] with cover art by Johan Camou. It was also divided into two books. These artworks were replaced in 2019 by the more abstract art of Slava Gerj (right) when the publisher refreshed the covers. 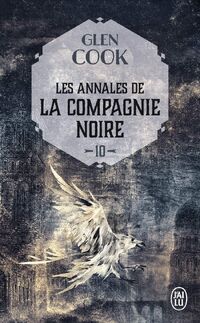 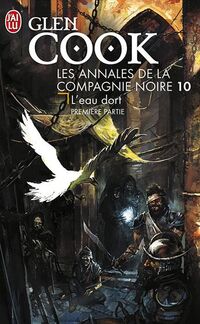 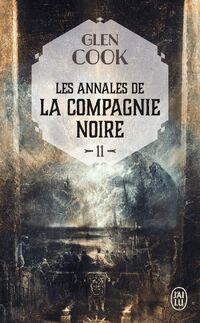 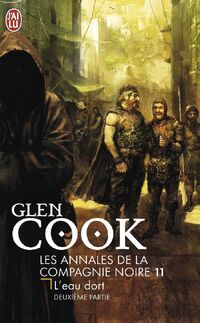 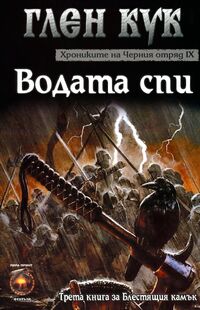 Retrieved from "https://blackcompany.fandom.com/wiki/Water_Sleeps?oldid=14630"
Community content is available under CC-BY-SA unless otherwise noted.