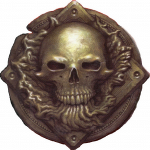 Welcome to the Black Company Wiki!

I'm both a proud fan and a vocal critic of the Black Company series. Always happy to discuss these books with fellow fans.

My user page here contains a brief description of my introduction to series back in the late 1990s. The rest is a random collection of observations about the novels.

In 1998 or 1999, my big brother introduced me to the computer game Myth II: Soulblighter. The game play was feverishly addictive, but the lore was also deeply fascinating. It wasn't long before I joined a forum where I learned about The Black Company... a clear inspiration for many of the names, themes, and overall atmosphere of the Myth backstory. Thus I was introduced to Glen Cook's novels, and I spent countless hours during one of my high school years devouring them.

The Black Company series revolves around immortal villains who have been buried underground or similarly trapped for centuries. In order of appearance:

A tiny handful of the important characters featured in these novels are spared a violent death, and survive to old age. Here are the few I can find:

Who's on the cover?

A list of who is showcased on the cover of each of the USA first-edition novels.

The main character of the series Croaker is an incredibly flawed person. At certain points in the novels, he is downright unsympathetic. As much as I love this book series, I do not hold back criticism. These are some of Croaker's decisions and actions which I still find disturbing:

Observations on the Taken

The Taken: Dead or alive?

In the dead/survived subheadings below, I combine the New Taken with the original Ten, something I am typically loath to do because they just aren't comparable in my opinion. But nevertheless I do it for the sake of completion so the grand total of 18 are listed.

Numbered chronologically by order of death:

The Taken: Seen by Croaker?

Order if seen clearly by Croaker:

Possibly only seen from a distance. Still need to verify the final 5 New Taken.

Retrieved from "https://blackcompany.fandom.com/wiki/User:Blue_Rook?oldid=14438"
Community content is available under CC-BY-SA unless otherwise noted.