Shadow Games by Glen Cook is the fourth novel of the Black Company series and the first of the Books of the South. It chronicles the permanent departure of Croaker and Lady from the northern empire; the Company's southward trek retracing its own steps backward through its long history; the surprising return of 4 of the Ten Who Were Taken; and, the Company's bloody entry into the Shadowmaster wars.

The earlier chapters of Shadow Games take place concurrently with the events of The Silver Spike. The unseen evil which psychologically distresses the Company shortly before and immediately after their departure from the Temple of Travellers' Repose is in fact the Limper, whose insane pursuit of them is exposed in The Silver Spike. (An unexplained and terrifying vision of a giant bird-like shadow spotted by Murgen and the wizards Goblin and One-Eye in chapter 12 turns out to be the Limper's fire-eater.)

With the Dominator finally defeated at the Battle of the Barrowland, the Lady's Empire is now apparently safe. But at great cost. The Lady herself has lost her immense powers, making her completely vulnerable and unable to wield magic. And, the Black Company has been reduced to merely six men. Its new Captain, Croaker has refused to accept defeat, and decides to march south in search of the Company's fabled origins, a place known only as Khatovar.

Returning to the Tower[edit | edit source]

Hiding her lost powers, the Lady accompanies the Company to her Imperial headquarters, the formidable Tower at Charm. As the Lady tends to her bureaucracy, Croaker is elevated to both Imperial legate and general during their two-week stay. Croaker loses sight of the needs of his men, however. One-Eye and Goblin are especially haunted by the place, which is packed with dangerous sorcerers. Croaker slowly begins to realize that danger – in the form of jealous Tower Guard officials – lurks around every corner.

During their stay, the Lady reveals she has decided to quietly abdicate rule of her empire to a new and trustworthy leadership. But Croaker cannot wait any longer, and he informs the Lady he must leave with his men. After they leave, the Lady chooses to follow them. She is vulnerable to her own minions for the first time, and, has nothing tying her to the northern continent anymore. Twenty-five days later, she surprises Croaker at the Gardens in Opal by keeping their promised date. They are dining at the very same spot where Raven murdered his wife so many years ago. The Lady has cancelled Croaker's arrangement with an embarrassing grain barge. In another ironic touch, they will all be taken across the Sea of Torments aboard The Dark Wings, the "very doomship" which had ferried the Company across the sea when they first took the Imperial commission. They pick up some new recruits as well: Big Bucket, Red Rudy, Sparkle, and Candles.

Across the sea: the southward odyssey begins[edit | edit source]

After a blissfully uneventful sea passage to the southern continent, they disembark at Beryl, but rapidly pass through due to their bloody history with the place. Outside the old city, three brothers (Cletus, Loftus, and Longinus) who have deserted the Urban Cohorts also join up with Murgen's sponsorship. In Rebosa, where Otto and Hagop had joined up, they accept Hagop's nephew Smiley. They trek through several cities including Padora, Croaker's birthplace, and finally exit the Imperial boundary. Later, four nomadic roi caravan guards also join, including Patience and Shadid.

Many "long leagues" later, they make a temporary stay at the Temple of Travellers' Repose, a monastery and a haven for travellers which contains a huge library. Here, copied manuscripts thought lost from the Annals are unearthed, left during the Company's northward march so many decades earlier. The Black Company leave after a short stay, after seeing an ominous storm on the way (alluding to concurrent events in The Silver Spike and the wicker man's pursuit south). After they depart, Murgen and the wizards Goblin and One-Eye briefly glimpse the terrifying vision of an unexplained giant bird-like shadow back near the Temple, so they hasten their southward trek.

Meanwhile the Shadowmasters, a tyrannical group of sorcerers ruling over the Shadowlands in the far south, become concerned as to the Company's movements. Seeing them as a significant threat, the Shadowmasters accelerate their plans to conquer territories north of their own, notably the giant principality of Taglios under the current rule of the Prahbrindrah Drah, and his sister the Radisha Drah. The Taglians had so far defeated a prior invasion due to the help of three foreigners – Willow Swan, Cordy Mather, and Blade – who successfully directed militias belonging to Taglios's cult leaders.

As the Black Company march further south they meet up with two guides whom the Temple monks had summoned: Wheezer and Baldo. They guide the group through One-Eye's peaceful homeland, the massive jungle of D'loc Aloc. Wheezer joins the brotherhood and shortly later, Geek and Freak from the savannah of the K'Hlata are accepted as well.

In service to the merchants of Gea-Xle[edit | edit source]

Mogaba and 31 other excellent Nar soldiers from the city of Gea-Xle next become the newest Company members. One-Eye purchases an imp at a bazaar which looks like Goblin; he uses the strange creature to torment his old rival. Croaker accepts a commission from the merchants of Gea-Xle, and the Company soon defeats a blockade of swamp pirates on a needleteeth-infested portion of the great river. When the mysterious pirate king threatens to capsize their barge from afar, Croaker uses Frogface to force the Lady into exposing that Shapeshifter is disguised among them. Shapeshifter is reunited with his powerful staff, and uses it to cause an explosive conflagration that slaughters the pirates in droves. The top-level sorcerer also chases away the pirate king, who is now revealed to be the Howler... another member of the Ten Who Were Taken who likewise seems to have returned from the dead.

In service to the Prahbrindrah Drah of Taglios[edit | edit source]

In a city on the great river, the Company is intercepted by a group of 4 strange travelers: Willow Swan, Blade, Cordy Mather, and a mysterious woman who turns out to be the Radisha Drah. This group has been sent by the Prahbrindrah Drah, the Prince of Taglios, a sprawling city at the bottom of Croaker's best maps. Croaker reluctantly accepts the Prahbrindrah's commission to militarize Taglios and push back against the Shadowlanders, a group of invaders from the south who are commanded by four sorcerers called the Shadowmasters. Croaker is appointed warlord, or Liberator, of Taglios. With the direction of Lady and Mogaba, the Company trains legions of Taglians in warfare, and they march south.

Now prosecuting the Shadowmaster wars, the Black Company and their Taglian legions use critical intelligence supplied by Shapeshifter to triumph over a significant Shadowmaster army at the Battle of Ghoja Ford. This victory foils an enemy maneuver on the Main that would have resulted in the loss of Taglios had they gone unchallenged.

Pressing onward, they reach the major Shadowlander city called Stormgard (formerly Dejagore). During the first night of the 2-day Battle of Dejagore, the Company and their Taglians capture the city. Shapeshifter neutralizes Stormbringer, one of the Shadowmasters, and the Company executes them both. The next day, another Shadowmaster called Moonshadow is paralyzed during a pitched battle outside the walls. But despite these victories, the Company and the Taglians are ultimately routed by overwhelming numbers, and their survivors retreat behind the walls. Croaker himself is shot off his black stallion by an arrow. When he awakens, he is stunned to see his assailant is Soulcatcher, now the fourth member of the Ten Who Were Taken who has seemingly returned from the dead. She is still headless from the sword blow he struck so many years ago. Alongside Moonshadow who is still impaled on the Lance of Passion, Croaker is abducted from the battlefield by Soulcatcher.

The back cover description incorrectly states that the Black Company left the north after the "Battle of Charm". The Company left following the Battle of the Barrowland.

Shadow Games was published as a standalone novel (with the exception of the Russian 2-novel combos) in the following editions, translations, and formats. They are listed in order of publication, earliest first; some reappearances of the same translation may be grouped together. See also Books of the South for the list of omnibuses in which Shadow Games appeared. 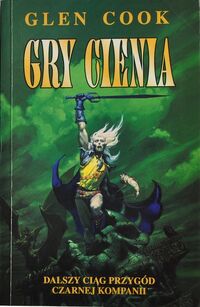 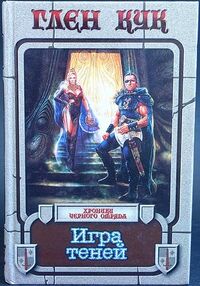 This single hardcover containing both Shadow Games and The White Rose was part of the publisher's Golden Fantasy series (Золотая серия фэнтези / Zolotaya seriya fentezi). The cover of the first printings is shown here. For the 2008 reprint with an alternative cover, scroll farther down. 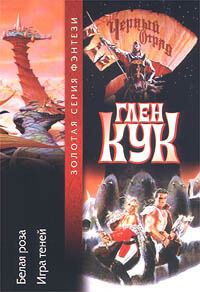 The French translation, first published by L'Atalante, features original artwork by Didier Graffet throughout the book. 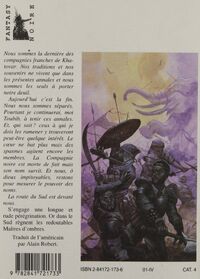 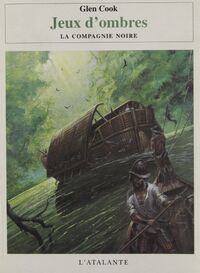 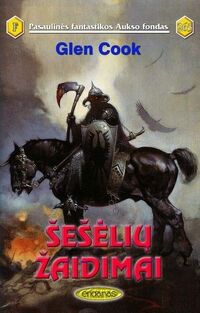 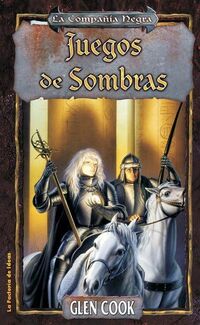 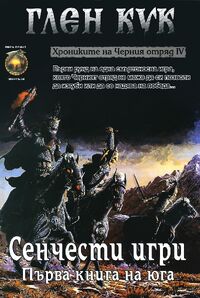 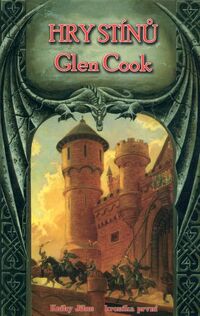 The same French translation previously published by L'Atalante (scroll farther up) was republished by J'ai lu in smaller paperback format [poche] with cover art by Johan Camou (left); this cover art was later replaced by the more abstract art of Slava Gerj (right) when the publisher did a cover refresh. 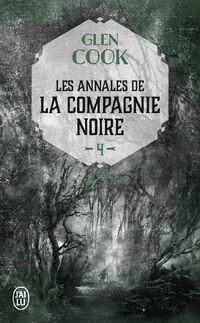 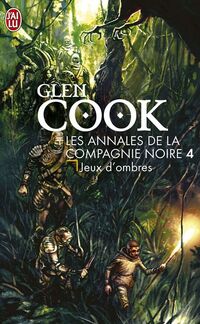 This single hardcover containing both Shadow Games and The White Rose was part of the publisher's Golden Fantasy series (Золотая серия фэнтези / Zolotaya seriya fentezi). This is a reprint with an alternative cover. To see the original cover which first published in 2000, scroll farther up. 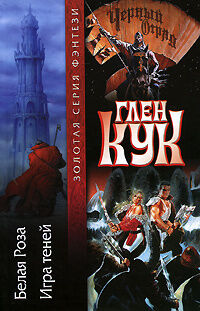 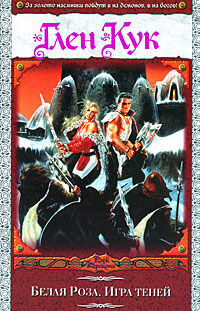 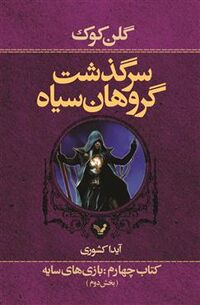 Retrieved from "https://blackcompany.fandom.com/wiki/Shadow_Games?oldid=14755"
Community content is available under CC-BY-SA unless otherwise noted.