One-Eye was a sworn brother of the Black Company whose membership predates that of any other member – aside from his younger blood brother Tom-Tom – in the modern Annals. By the time of the first book of Croaker, One-Eye was already about a hundred and fifty years old, sustained by his abilities as a minor wizard. A wizened, wrinkled, old black man with only one eye who wore a filthy, infamous black hat at all times, One-Eye was an essential member of the Company.

Through his time with the Black Company, One-Eye was best known for his longstanding feud – truly, a deep and enduring friendship in disguise — with fellow Company wizard Goblin. He was also known as an incorrigible criminal, drunkard, and degenerate gambler, who dabbled in black marketeering, the production of alcohol stills, and cheating at tonk. Despite the less savory aspects of his personality, One-Eye was one of the most valuable brothers of the Black Company, due to his vast personal experiences and his abilities as a wizard.

It is not implied that One-Eye is more or less potent than the three other Company wizards Tom-Tom, Goblin, and Silent. But their powers were not identical. While One-Eye's knowledge of sorcery exceeded that of Goblin, they shared much of their expertise in illusions, and Goblin was considered far more creative in his sorcery. Silent is stated to have a more deadly type of magic in his employ.

One-Eye frequently employed frightening illusions to distract enemies. While his powers would be worthless against superior sorcerers like the Ten Who Were Taken, they were sufficient to save countless Company brothers in a wide variety of combat situations throughout the decades of his service. He occasionally functioned as the Company's chief interrogator and torturer. For example, after assassins sent by the Shadowmasters fail to kill Prahbrindrah Drah in Shadow Games, One-Eye ended up killing one of the survivors of sheer terror by using overly potent illusions to extract information from him.

One-Eye's magnum opus of sorcery was a black spear, carefully crafted and layered with spell after spell over many years. The original use for the weapon was to kill the Shadowmaster called Shadowspinner during the Siege of Dejagore, although it was not used successfully for this purpose. Upon completion, it was powerful enough to help defeat the ferocious forvalaka, Lisa Daele Bowalk, and later, to be used in a strike against the prehistoric entity known as Kina.

One-Eye also possessed limited skills in healing magic, often supporting Croaker as the physician's principal assistant during battlefield surgery. As Croaker wrote in Shadows Linger, "often there was a man beyond my help who could be saved with a little magic". He also enforced Croaker's regulations for dental health among the men. The old wizard accomplished this by employing "tiny little spells" on the Company men's teeth to protect them, spells which had to be renewed every two years.

One-Eye was Tom-Tom's older brother by 1 year. They were born in D'loc Aloc, a vast jungle on the southern continent. As boys, Tom-Tom and One-Eye were sold to N'Gamo, a wizard of noteworthy magnitude who wanted them as his apprentices. Shortly after, N'Gamo attempted to destroy a young male forvalaka but failed, losing an arm and a foot in the process. The brothers never forgot the experience. After that, both joined the Black Company and were present when the group visited the Temple of Travellers' Repose.

One-Eye survives an unprecedented amount of time in the Black Company, outliving even his best friend Goblin. Ultimately, he is murdered within the world of Hsien by the vengeful forvalaka Lisa Daele Bowalk, despite the best efforts of Lady and her fireball projector, and Croaker with the spear One-Eye had spent decades crafting. 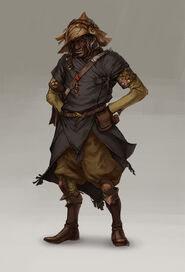 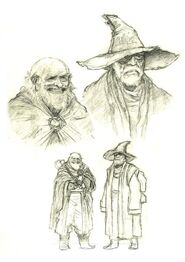 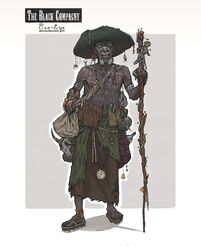 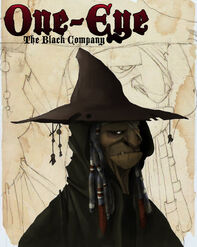 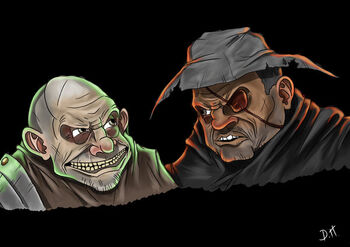 Goblin and One-Eye by Denis Pospelov 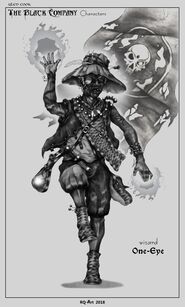 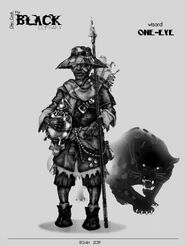 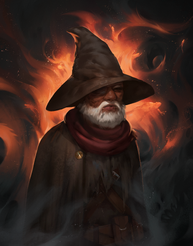 One-Eye by RaV89
Add a photo to this gallery
Retrieved from "https://blackcompany.fandom.com/wiki/One-Eye?oldid=15226"
Community content is available under CC-BY-SA unless otherwise noted.