Battered by the Dominator (Battle of the Barrowland)

Elmo was an experienced sergeant of the Black Company prior to and during the Books of the North. He was a long-standing, respected member and he sponsored the membership of Croaker. Croaker considered Elmo to be his best friend among all of the Company's members.

Elmo was serving with the Company during their contract with the Red Syndic of Beryl, the oldest of the Jewel Cities and a major harbor city on the southern continent. He survived the chaotic events there, and made the trip across the Sea of Torments aboard Soulcatcher's giant galley, The Dark Wings, to Opal. Now in the service to the Lady's Empire, Elmo participated in many of the military actions in Forsberg, the Salient, and other locations. In one incident, he flogged a disrespectful corporal courier from the Limper's army who was held down by Otto and Crispin.

Elmo led the raid into the Temple of Occupoa of Aloe during which the Company captured Tides Elba. His subordinates during this action were Goblin, Silent, Tuco, and Reams, and they were accompanied by Croaker. During this otherwise bloodless event, Elmo broke the arm of a local boy who was attempting to steal from the Temple's poor box.

Elmo was chosen to lead a small advance team of 25 Company men that were flown from the Barrowland, into the city of Juniper, by the new Taken via flying carpet. His team included the wizard Goblin; the physician and Annalist Croaker; the veterans Pawnbroker, Kingpin, and Otto; and other trusted soldiers including Sharkey, Tickle, Crake, Walleye, and Stork. This elite group made the trip ahead of the rest of the Company, and were therefore spared the long march across the northern continent and through the frigid Wolander Mountains.

From the palace of Duretile, Elmo directed Company duties, answering to Whisper personally, until the Captain finally arrived. Elmo sent Stork into the Wolanders with a message to the Captain, explaining their latest developments, and mentioning Raven, a Company deserter who had been missing since the Battle of Charm.

After Elmo's advance team reunited with the main Company body, they participated in the Battle of Juniper. Elmo personally charged into the Black Castle with a number of Company brothers and armed locals when the Limper called for help, and for a time was presumed killed during that action. He actually survived, and soon escaped the ruined city with about 70 other Company soldiers on horseback. He brought them all southward and entered the city of Chimney, where, to Croaker's delight, they rendezvoused with the remaining Company leadership. At some point after this, Elmo was apparently appointed to replace Candy as Lieutenant. Elmo served as second-in-command of the Black Company through the end of their time as soldiers of Darling's New White Rose Rebellion.

The sergeant was in command of the advance team which marched ahead of the main body of the Black Company during "Shaggy Dog Bridge". His subordinates included Rusty, Robin, Whittle, Zeb the archer, and the wizard One-Eye. Croaker insinuated himself into the group without Elmo's knowledge, which angered him when he discovered it. (Croaker, as physician, was too valuable a resource to be in a recon group, and he was not as fit as the other men.) When Blind Emon battled the new Taken in an explosive airborne fight, Elmo ordered everyone to flee given the excessive danger.

During the Battle of the Barrowland, Elmo was slain alongside the Lieutenant by the Dominator in hand-to-hand combat. Of all the Company brothers killed that day, Croaker mourned the death of Elmo the most. 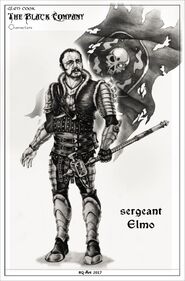 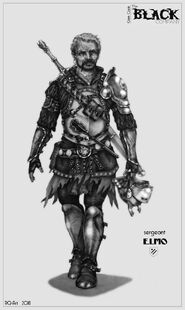 Elmo by Виталий Стрелец
Add a photo to this gallery
Retrieved from "https://blackcompany.fandom.com/wiki/Elmo?oldid=14425"
Community content is available under CC-BY-SA unless otherwise noted.