Darling was a young girl rescued by the Black Company during their Forsberg campaign in The Black Company. She possessed an anti-sorcery null, and for this reason would come to be considered the reincarnation of the White Rose, a woman who overthrew the Domination about 407 years earlier.

Darling was the long-awaited savior who was prophesied to defeat the Lady, and she became the leader of the New White Rose Rebellion, a renegade movement against the Lady's Empire. Her growth into the leading figure of the renewed Rebel movement played a major role not only in the history of the Company but of the northern continent as a whole. One year after The White Rose, she and her allies – an army of ferocious monsters from the Plain of Fear – faced off against the Limper and other enemies in Oar to secure the silver spike.

Darling was a blue-eyed, blonde girl from a village in the province of Forsberg. She was deaf and used sign language to communicate with others. She was nine years old when the Black Company met her for the first time. Croaker and Raven found her and her grandfather Flick in their burnt village which had been sacked by the Limper's savage army. She was being raped by drunken soldiers serving one of the Limper's captains, Lane. Raven killed two of them and freed her, but at the cost of securing the Limper's unmitigated enmity. Raven looked after her closely, and he became her primary guardian after Flick was murdered in Oar by thugs working for the Limper's subordinates Lane and Colonel Zouad. The Company effectively adopted her.

Outside the Tower at Charm, Darling foiled an assassination attempt against Raven. The mysterious attacker kept Raven subdued with a sleep spell, but, Darling was inexplicably unaffected. She swatted away the assailant with her doll. One-Eye and the Captain reported this confusing event to Croaker, but the girl's unique ability would only be understood after later events. Croaker would immediately surmise that the failed assassin must have been Soulcatcher or possibly Stormbringer.

At the Battle of CharmEdit

During the bloody chaos of the Battle of Charm, Darling's unique talent first manifested publicly. A Rebel sleep spell knocked down a group of soldiers, including Raven, but Darling was unaffected. She quickly woke up Raven and several others, who sprung back into battle when this should not have been possible. This attracted some unwanted attention, as 400 years in the past, a legendary general known as the White Rose presumably had the same sort of magic resistance, or "null", which enabled her to defeat the Dominator. Raven was the first to react, and after the battle he disappeared, taking the girl with him. Croaker and Silent managed to track them down, and Croaker revealed that he and several others also had realized that Darling was in fact the White Rose reborn, which explained her immunity to magic. Fearing that the Lady would make an attempt on Darling's life, the Company decided that she should leave with Raven, while reporting them dead to cover their tracks.

Six years after Charm, Darling and Raven entered the frigid city of Juniper, on the distant northwestern coast of the northern continent. They stayed at the Iron Lily inn, where she started working as a barmaid for Marron Shed. Raven began surreptitiously selling corpses to the Black Watchers, which the Black Company was eventually ordered to investigate. Raven quickly learned who was after him, and believed (incorrectly) that his old comrades had been sent by the Lady to assassinate Darling. He left the city with Darling and faked his death outside the city of Meadenvil. The Company didn't fall for his tricks and kept following. In Chimney, they learned that Raven had apparently died, but found this time even Darling was utterly convinced. She stayed with the Company on the run for the 4 years it would take them to arrive at the Plain of Fear.

During "Bone Eaters", Darling and the loyal Black Company were leading a train of refugees from the Lady's Empire eastward, away from the Imperial pursuit led by Whisper.

She and her constant companion Silent arrived at the front of the line shortly after Rusty's failed attempt to rape Chasing Midnight, a newly-captured brigand girl who was 14 years of age. Darling subjected Rusty to a look of disapproving disdain, and the young soldier was humbled. She then asked Croaker to examine the girl first, in case she was pregnant and needed attention (she was not). When Midnight wretched in pain upon Darling's approach, they learned she was a witch because her body was reacting to Darling's null. Empathizing with her, Darling instructed Silent to train her, keep her safe, and keep her separated (from Darling herself) so the null would not hurt her again. She also issued an explicit, global order that no one was to harass or even approach her sexually. She later angrily interrupted One-Eye when he made a creepy statement directed at the girl.

Darling overlooked the desertion of Midnight's brother, Chasing Moonlight and his companions. When they returned to assault Rusty, she simply assigned them additional duty shifts. As Midnight became increasingly popular with the itinerant band, Croaker detected that Darling was becoming a bit jealous. She also seemed to fear that perhaps Croaker was being seduced by the attractive young woman.

At the Village of Hungry Ghosts, Darling situated herself at a point where her null blocked her followers from the lethal siren call of the discorporate spirits residing there. Four people (including Company brother Thorodd Asgeir) circumvented her, however, and were killed by the spirits. In reply, Darling agreed to enact Chasing Midnight's plan to hunt down the 3 incarnate hungry ghosts. Darling even personally beheaded an old possessed woman using Otto's axe. She continues as the spiritual leader of the group when they briefly join in service to the Magistrates of Rue and after they depart the city.

The Black Company arrived at the Plain of Fear after 4 harrowing years being chased by the new Taken. There, they established a subterranean headquarters called the Hole where they were safe from the Lady's forces for 2 years. Darling was now about 24 years of age and had grown to almost six feet tall. Now known as the White Rose, she led the New White Rose Rebellion – a major Rebel movement against the Lady and her Taken. Her primary protector was the godlike Father Tree, who commanded the bizarre and powerful species of the Plain to support her.

In the Plain of Fear the two opposing forces had an epic battle. The Lady counted on the Taken and their magic, while Darling used her null and the strange creatures inhabiting the Plain. The flying mantas, the windwhales, and her anti-magic field granted her some victories, but her counter-offensive was stopped by the Lady's forces outside Horse.

While Darling and the Lady battled, the Dominator secured a guaranteed means of escape from the Barrowland. Darling accepted the Lady's proposal for alliance, and their mutual enemy was defeated at the Battle of the Barrowland. However, the Lady immediately betrayed her new ally, using Darling's true name to strip her of her power, the anti-magic null. In retaliation, Silent broke his vow and spoke aloud the Lady's true name in the same ritual, rendering her powerless as well. Afterward, Darling left the Barrowland and the Black Company.

Although now powerless without her null, Darling still retained the respect of Father Tree and continued to travel in the company of his Plain monsters. As for human companions, the wizard Silent and the three Torque brothers – Stubby, Paddlefoot, and Brother Bear – remained fanatically devoted to her. She was encamped with them in the Windy Country when the sorcerer Bomanz tracked them down. They were surprised to see him alive, as he had convincingly faked his own death in combat against the dragon at the Battle of the Barrowland about a year prior. Bomanz recruited them in his mission to bring attention to the revelation that the Limper was still alive and posed a threat to civilization. Darling accepted him in her company, taking him aboard their windwhale, but her new travel companion was deeply distrusted by Silent and comically harassed by the talking Plain buzzard Virgil.

Darling and her forces had several confrontations with the Limper and Toadkiller Dog, pursuing them as far as the Temple of Travellers' Repose in the southern continent. Outside the Temple, the windwhale they were riding was attacked by the fire-eater, a ferocious demon commanded by the Limper. The humans survived only because of the intercession of Bomanz, but, their windwhale was mortally wounded and it crashed to the ground. They were dragged from the wreck of the burning beast by Raven and Case, who had arrived near the Temple via the land route. She and her horde, which still included 4 windwhales, next besieged the Temple after it was captured by Limper and Toadkiller Dog. They conducted a successful invasion of the structure, but, were suddenly forced to end it prematurely when the menhirs accompanying them received psychic orders from Father Tree to return north.

Darling immediately rushed back over the Sea of Torments with the beasts and her human companions as news from the Sapling that the silver spike had been stolen from it spread. She was unaware that the Limper and Toadkiller Dog both survived her siege. She made a brief stopover in Opal, a city already being rebuilt by the Empire after it had just been sacked by the Limper. There, she orchestrated an anticlimactic reunion between Raven and his estranged son and daughter.

In Oar, she and her allies unfurled the banner of the White Rose one last time. She partnered with Exile and his Imperial forces in one last fight against the Limper, who was finally vanquished. During the fray, she personally slew either Gossamer or Spidersilk. Although the silver spike was secured forever, the victory came at grave personal cost to Darling. Paddlefoot and Brother Bear were killed by the spike thieves, and Silent sacrificed himself during the battle. Darling was even forced to order Raven's death after he accidentally touched the silver spike with his bare hand. Anguished, she abandoned the title of the White Rose once more and chose to lead a peaceful life in the province. She married Case after giving him a tour of the Hole, her former headquarters during the New White Rose Rebellion. The two would go on to have children and become grandparents. 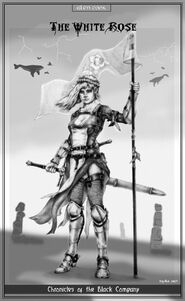 Darling by Didier Graffet
Add a photo to this gallery
Retrieved from "https://blackcompany.fandom.com/wiki/Darling?oldid=14879"
Community content is available under CC-BY-SA unless otherwise noted.