The Captain (known by no other name) was the leader of the Black Company during the time of Croaker's first and second chronicles. He served as commanding officer since, at latest, the events in Beryl, where the Company was maneuvered into the service of the Lady of the northern Empire. A master strategist, he surrounded himself with excellent subordinates like the Lieutenant, and sergeants like Elmo, Candy, and Mercy. And, he was possessed by a level of determination that seemed to match the Black Company's long trek through history.

Croaker often described the Captain's mannerisms: he was notorious for his bear-like demeanor and way of movement. Although he was frequently brusque with his own men, he handled personal interactions with dangerous sorcerers like the Limper and even the Lady herself with unflappable aplomb.

Croaker described the Captain as one of the Company's more enigmatic figures: a man who seemed to have successfully severed all connection with his past. Like every Company member at the start of The Black Company, it is known he was born in the southern continent. Of the few other concrete details from his past, Croaker recorded that the Captain: was born in one of the Jewel Cities (but not Opal); had been a professional soldier before joining the Black Company; and then became a wanderer after something traumatic overturned his personal life. After he joined the Company, he was eventually elected to become Captain, but by the time of "Tides Elba", no one in the band could remember why. Later events would reveal that the Captain had some minimal training in wizardry, just as Raven had in his youth. This was a common practice for the children of wealthy nobles, strongly suggesting he came from an aristocratic family.

After the uprisings in Beryl, the Captain accepted a new contract with Soulcatcher, and the Black Company entered the service of the Lady. He and the rest of his men sailed aboard the imperial flagship, The Dark Wings, from Beryl, across the Sea of Torments, to Opal. This journey was a watershed moment in the Company's history. For years afterward, the Captain and his most senior members would regret this passage across the Sea of Torments, and the Captain would make a personal goal to return to the southern continent.

As commanding officer, the Captain was responsible for the Company's numerous victories for the Lady's Empire against the Rebel in the northern continent. Through discipline, deception, and execution, the Black Company under the Captain earned a reputation as the best soldiers in the Empire. As a result, the Company gained tremendous prestige, being granted field command over Imperial regulars, and being assigned to many critical and difficult assignments. When the Company was placed in command of Meystrikt, the main fortress of the Salient, the Captain was assigned forces and powers usually reserved for one of the Ten Who Were Taken. This was an unprecedented vote of confidence directly from the Lady, which sent a shock waves of jealousy and surprise throughout the Empire's regular military. At the Battle of Charm, the Captain and the Company (now 1,000 strong) were given pride of place, situated above all the Taken, on the earthen pyramid itself.

On the Lady's orders, the Captain led the bulk of the Black Company clear across the northern continent to Juniper, a city far outside the bounds of the Lady's Empire in the frigid northwest. He crossed the Wolander Mountains with them, and was not part of the advance team (Croaker, Elmo, Goblin, et. al.) that had been flown into the city beforehand by flying carpet. Despite his years of excellent service to the Lady, the Captain and his band were still deeply hated by the Lady's three strongest Taken: the Limper, Whisper, and Feather.

During his time in Juniper's palace Duretile, the Captain uncovered some kind of dangerous Imperial plot against the Company. In the chaos of the Battle of Juniper, he sent Silent to secretly order the most endangered comrades, the Company's senior membership, to flee before the battle's climax. He even had a ship prepared to take them to safety. The Captain himself was unable to join Silent without arousing suspicion, but he did flee Juniper when he spotted an opportunity. He stole the Lady's flying carpet and piloted it out of Duretile, revealing for the first time that he had at least some minimal talent for wizardry. But, being wholly inexperienced, he crashed into the sound at high speed and was lost half a mile away from the fleeing Company ship. Croaker assumed that the Captain was attempting to rejoin his men and his death was not intentional. Regardless, the Captain's sacrifice was not in vain: he succeeded in destroying the last flying carpet in the entire empire, severely handicapping the ability of the Lady and her Taken to hunt his newly-fugitive men. Once at sea, the Company mournfully eulogized him.

The Captain bought them just enough of a head start to allow Croaker to arrange his ambush of the Limper outside Meadenvil. The Lady would later confirm that the anti-Company plot which the Captain had uncovered was indeed real. But, she asserted it was not her doing, and that it had rather been an unsanctioned conspiracy between her minions Whisper and Feather.

The senior Company members elected the Lieutenant to assume the captaincy, per the Captain's last written wishes.

The Captain by Mikey Patch (Irontree) 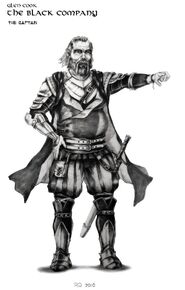 Captain by Виталий Стрелец
Add a photo to this gallery
Retrieved from "https://blackcompany.fandom.com/wiki/Captain_(character)?oldid=12649"
Community content is available under CC-BY-SA unless otherwise noted.