The following is a cover gallery of the Black Company series novels and omnibuses, organized chronologically and by language. It showcases the wide variety of cover art, the long publication history of the series, as well as the diversity of languages into which the novels have been translated.

Many of the artworks seen below were commissioned specifically for their Black Company publications. These include the novel covers in: English (Keith Berdak, Nicholas Jainschigg, Raymond Swanland); French (Didier Graffet, Johan Camou, Slava Gerj); Serbian; Finnish (Petri Hiltunen); and the recent Spanish editions published by Montena (Adam S. Doyle). However, other covers featured "recycled" artwork that had appeared on prior, unrelated novels by different authors sometimes decades prior. Those include the novel covers of AST's first Russian editions (e.g. Luis Royo); the Lithuanian editions (e.g. Frank Frazetta); several Bulgarian editions (e.g. Ken Kelly, Rowena Morrill); all but one of the first print run of the Polish editions (e.g. Oliviero Berni, Michael Whelan); and, 8 out of 10 of the Spanish editions published by La Factoría de Ideas (e.g. Jim Burns).

The first 6 novels of the series were published in mass market paperback format by Tor Books and featured cover artwork by Keith Berdak.

The 4 novels of the Books of Glittering Stone were first published in hardcover format by Tor Books and featured cover artwork by Nicholas Jainschigg.

She Is the Darkness

Shown here are the first omnibuses of the series, published by the Science Fiction Book Club in hardcover format. These were made available only to SFBC members and received very limited distribution. (For the English-language omnibuses that are still available, see the "English: still in print" section below.) 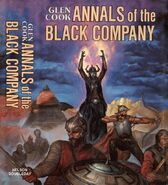 Omnibus 1
Annals of the Black Company 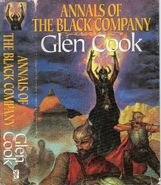 The 3 Books of the North were published by Roc for sale in the United Kingdom in 1992. Like the first American editions, they were printed in mass market paperback format and featured the same cover artwork by Keith Berdak, although the stylized lettering of the titles were changed.

The first 2 Books of the North were translated into Russian by North-West (Северо-Запад / Severo-Zapad) but were "pirated"/unauthorized editions. They both contained original interior illustrations by the cover artist, Vladislav Asadullin‏‎. These are not the same Russian translations which were published later (see below) by AST.

The 10 original Black Company novels were translated into Polish and published by Rebis. Also included in the gallery below are the 2 newer covers that were included in the republished editions of the first two novels.

The 10 original Black Company novels were translated into Russian and published in individual hardcover format by AST as part of the Dragon Age Chronicles (Век Дракона Хроники) series. The translations of the first two novels here are unrelated to the unauthorized translations published several years prior by North-West (see above).

The Lithuanian publishing house Eridanas only published the first 8 novels, with She Is the Darkness (Tamsa - tai ji) being split into two books, as shown.

All artwork by Didier Graffet:

These German translations of the Books of the North, translated by Heiko Langhans, are out-of-print:

The Czech publishing house Brokilon only published the first 4 novels of the series. The 3 Books of the North were published in 2000, followed by Shadow Games (Hry stínů) six years later.

The 10 original Black Company novels were republished in Russian by AST as part of the Golden Fantasy series (Золотая серия фэнтези / Zolotaya seriya fentezi). Unlike the prior editions (the Dragon Age Chronicles [Век Дракона Хроники / Vek Drakona Khroniki] shown above) from the same publisher, this series presented the first 8 novels in 4 pairings. The first 2 pairings were republished in 2008 with alternative covers as noted:

The 10 original Black Company novels were translated into Spanish and published by La Factoría de Ideas.

The 10 original Black Company novels were translated into Bulgarian and published by Лира Принт (Lira Print).

The French publisher J'ai Lu republished the 10 original Black Company novels that had previously been printed by L'Atalante (see the "French: L'Atalante" gallery above). Whereas L'Atalante published them in a higher-quality paperback format ("broché"), the J'ai Lu editions are smaller ("poche") paperback editions.

The first print runs of the novels published by J'ai Lu featured the cover art of Johan Camou: 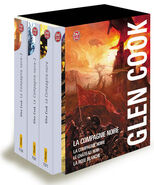 The publisher J'ai lu has refreshed the covers of the novels with new artwork by Slava Gerj, replacing the prior art by Johan Camou shown above. However the ISBNs and publication dates remain the same.

Omnibus 2
The Books of the South

Omnibus 3
The Return of the Black Company

Omnibus 4
The Many Deaths of the Black Company

Annals of the Black Company

The Polish publisher Rebis republished the 10 original novels in omnibuses, using the same artwork by Raymond Swanland from the corresponding American omnibuses. They also translated and published Port of Shadows in 2019.

The Romanian publishing house Millennium Books only published the first 2 books of the series. The back of the second paperback featured an advertisement for Roza Albă, the forthcoming Romanian translation of The White Rose, but it does not seem this was published. 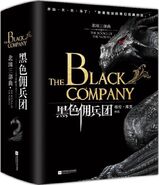 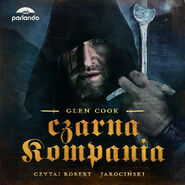 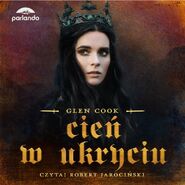 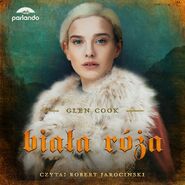 As Sombras Eternas
Retrieved from "https://blackcompany.fandom.com/wiki/Black_Company_series/Cover_gallery?oldid=15159"
Community content is available under CC-BY-SA unless otherwise noted.